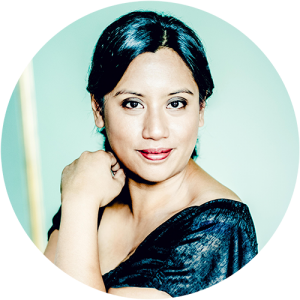 Carmen Flores is a musician dedicated to creating new pathways for experiencing and performing classical music.  From 2007 – 2019 Carmen was Principal Viola of the Royal Ballet Sinfonia, performing with the orchestra across the UK and abroad for the Birmingham Royal Ballet. Carmen has performed as soloist and Guest Principal Viola with orchestras and ensembles including English National Opera, the Canadian Opera Company, Orchestra of the Swan, the English Chamber Orchestra, Britten Sinfonia, Sinfonia VIVA, and the European Union Chamber Orchestra.

She is a founding member of the acclaimed Villiers Quartet (VQ), which is Quartet-in-Residence at the Jacqueline du Pré Music Building at Oxford University. Hailed as one of the most “adventurous” string quartets in the UK (Strad Magazine) and “Champions of British Music” (Guardian), the VQ has made several acclaimed recordings on the Naxos, Somm, and Lyrita record labels.

Carmen is a recipient of the prestigious US Fulbright Award, and she has given performance masterclasses at the University of Nottingham, Oxford University, Dartmouth College, Birmingham Conservatoire, and Sheffield University, among others. Carmen has performed throughout the United States, Canada, Asia, and Europe and she has been featured on several BBC Radio and Television broadcasts, including BBC Radio 3’s In Tune and The Andrew Marr Show. She has participated in Les Jardins Musicaux Festivals (Switzerland), Tanglewood (USA), Pacific Music Festival (Japan), and the Boyne Music Festival (Ireland).

She is Director of the Nottingham Chamber Music Festival (NCMF), which celebrates chamber music and the creative community at venues across Nottingham. She has also served as advisor on programming to Nottingham Trent University’s University Hall and has worked with closely with concert venues and organisations to curate music programmes. She performs on a viola made in 2006 by British luthier William Castle.